Everything You Want to Know About OLEDs (and Nothing You Don’t), Explained in Simple Terms 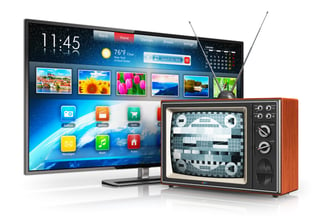 OLED displays are the latest technology taking over living rooms (and pockets) around the world. After the release of the iPhone X, which features a bevel-less, ultra-thin OLED screen, consumers are finally starting to get curious about this technology and all its potential since it first came to market in 2012.

But if the technology is so promising, why don’t you see more OLED TV screens and smartphones everywhere? And why are we still making LCD displays?

There are a few good reasons. But first, let’s dive into the difference between the two:

Years ago, LCD screens replaced the boxy TV sets that used CRTs (cathoid-ray tubes) to display images. As a result, our TVs got much slimmer and more efficient, and the picture quality improved tremendously.

If you want a technical explanation for how LCDs (liquid crystal displays) work, Engineerguy offers an elegant explanation here. But to get the basic gist of things, all you really need to know is that LCDs are made up of tiny pixels formed by liquid crystal cells. It sounds complicated, but stay with us. When an electrical current is applied to the liquid crystals, they move in predictable ways, allowing light and colors to pass through. But in order for us to actually see what’s happening, the display needs a backlight. Add an LED light source and voilà! You’ve got a nice, crisp picture.

OLED (organic light emitting diode) displays, on the other hand, don’t need a backlight for you to see the picture, because their pixels are self-emitting. In other words, they produce their own light. This means that OLED screens don’t need that extra LED light source and therefore, can be much more compact than even the super-thin LCD screens you’re used to. (Some OLED screens are so thin, in fact, that you can even bend them.)

But there are more benefits to ditching that backlight. For one, backlighting makes it difficult to capture those deep, pitch blacks. Since OLEDs have more precise control over light, screens can achieve “true black,” improving contrast and picture quality in general.

Getting rid of the backlight also allows you to view the picture from wider angles without sacrificing color intensity or contrast—LCD screens on the other hand, are only optimal when viewed from dead center. OLED screens come in handy whenever you have a big group of people fighting for the best view, or when your space dictates that you have to put your TV at an odd angle, say above a fireplace.

You’re probably wondering—if the picture quality is so much better, if it uses less energy, if it’s lighter, slimmer and can fit just about anywhere—why are we still bothering with LCD screens? The answer can be summed up in one word: price. You’d be hard pressed to find a set for under $1,000, and the fan-favorite Sony XBR Bravia retails for $3,500—but you can easily drop upwards of $20K on a single set. If you’re worried you’ll never get to try out this new tech in your home, there’s a ray of light at the end of the tunnel: prices are coming down…slowly.

There are still a few other issues with OLEDs, like burn-in, which is currently preventing computer monitor manufacturers from adopting the technology. And only time will tell if the new iPhone X users will encounter similar problems. But even with these set-backs, it’s safe to say that we’re just beginning to see how OLEDs will change how we see the world.