Employees Committed to Our Community

At ImOn Communications, we take pride in being a part of the Cedar Rapids area community. We believe in supporting and giving back to the communities we serve through donations of time, resources, and sponsorships to local organizations. Our employees also get involved by participating or volunteer in over 70 local nonprofit organizations each year. 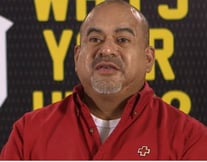 But sometimes an ImOn employee goes above and beyond the call of duty. Brock Staley, ImOn’s Warehouse Coordinator is one of these employees!

When his neighbor’s house exploded on the afternoon of June 27th, Brock Staley and his neighbor Ken Blazek sprang into action. Ken grabbed a wrench and ran to shut off the gas while Brock grabbed fire extinguishers to fight the flames.  Brock then entered the damaged home and pulled his 64-year-old neighbor to safety. (read full story here)

For their courage, Hy-Vee and the American Red Cross will honor Brock and Ken as the 2016 Iowa Citizen Heroes. They will receive the honor during the Iowa vs. Nebraska game on Friday, November 25th. The Cedar Rapids Fire Department will also honor them for their heroic acts sometime next month.

ImOn would like to congratulate Brock on his award, and thank him for his act of heroism and for being a part of the ImOn team.